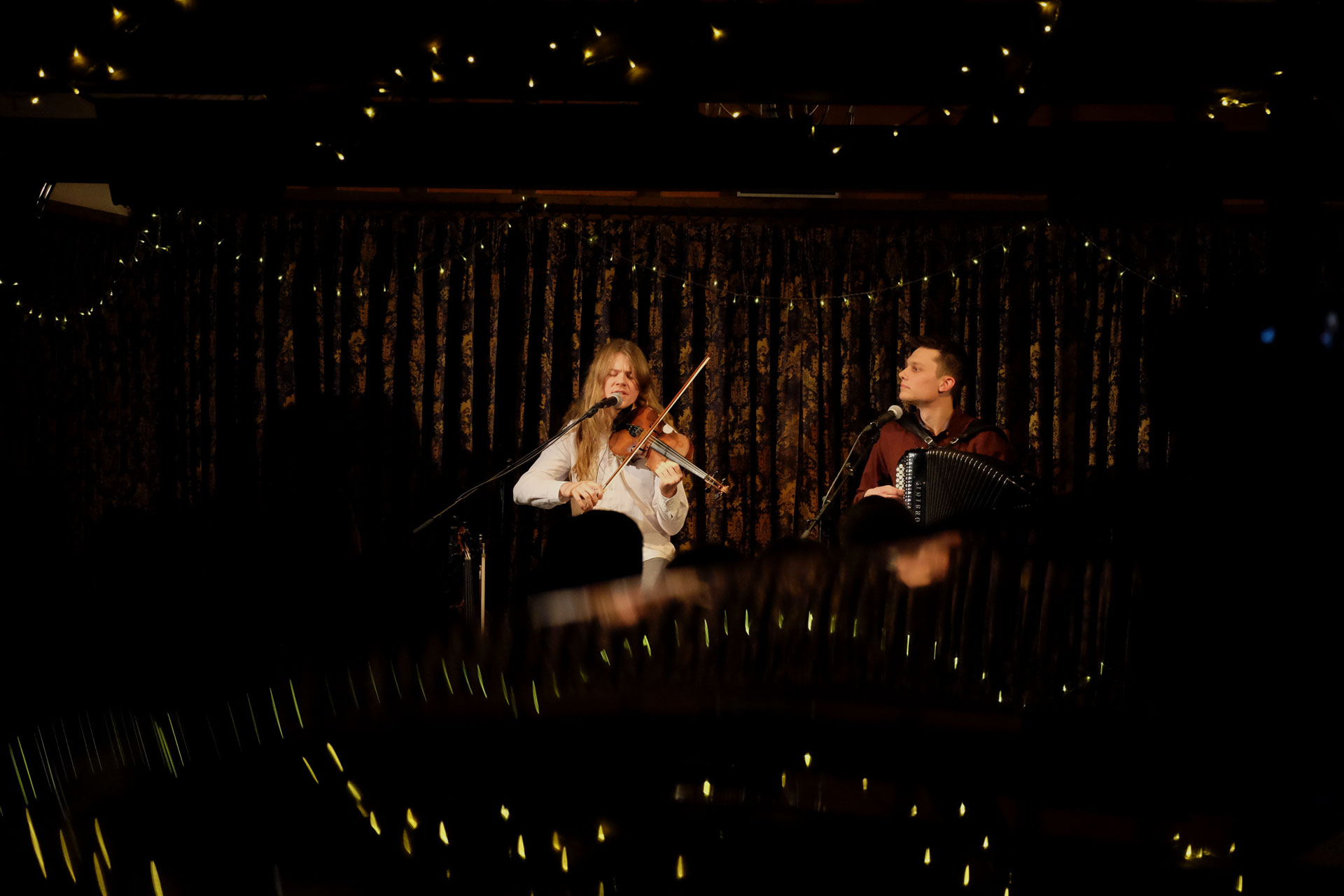 We all sat down after Novembers event with grins from ear to ear. I think the entire audience left with a smile on their face. How could they not?! Andreas and Rune made such an amusing duo … witty stories and throw away comments that had the entire room bursting out in laughter. Plus Oliver George and bass player, Navid, shared their beautifully crafted songs with us. These are the kind of gigs we love to put on at the Froize. Talented musicians … fantastic showmanship … (and a lot of long flowing locks) 🙂

For those of you who didn’t make it … you missed a cracker!

Andreas and Rune, hail from Denmark, and although they have been over here in various other guises … this is their first time touring the UK as a duo. We were the opening night of their week long tour and you wouldn’t have guessed it! (there is a rumour circulating in the venue circles, that it’s always better to get an act towards the end of their tour, rather than the start … but I think that this particular charismatic Danish duo have totally blown that myth into outer space). What a show! You wouldn’t have guessed they’d been travelling all day to get here … ferries, planes, cars … I’d have been shattered … but they were pros about it. Give ‘em a green room and a bit of hearty veggie curry … and they were well on their way to recovery. 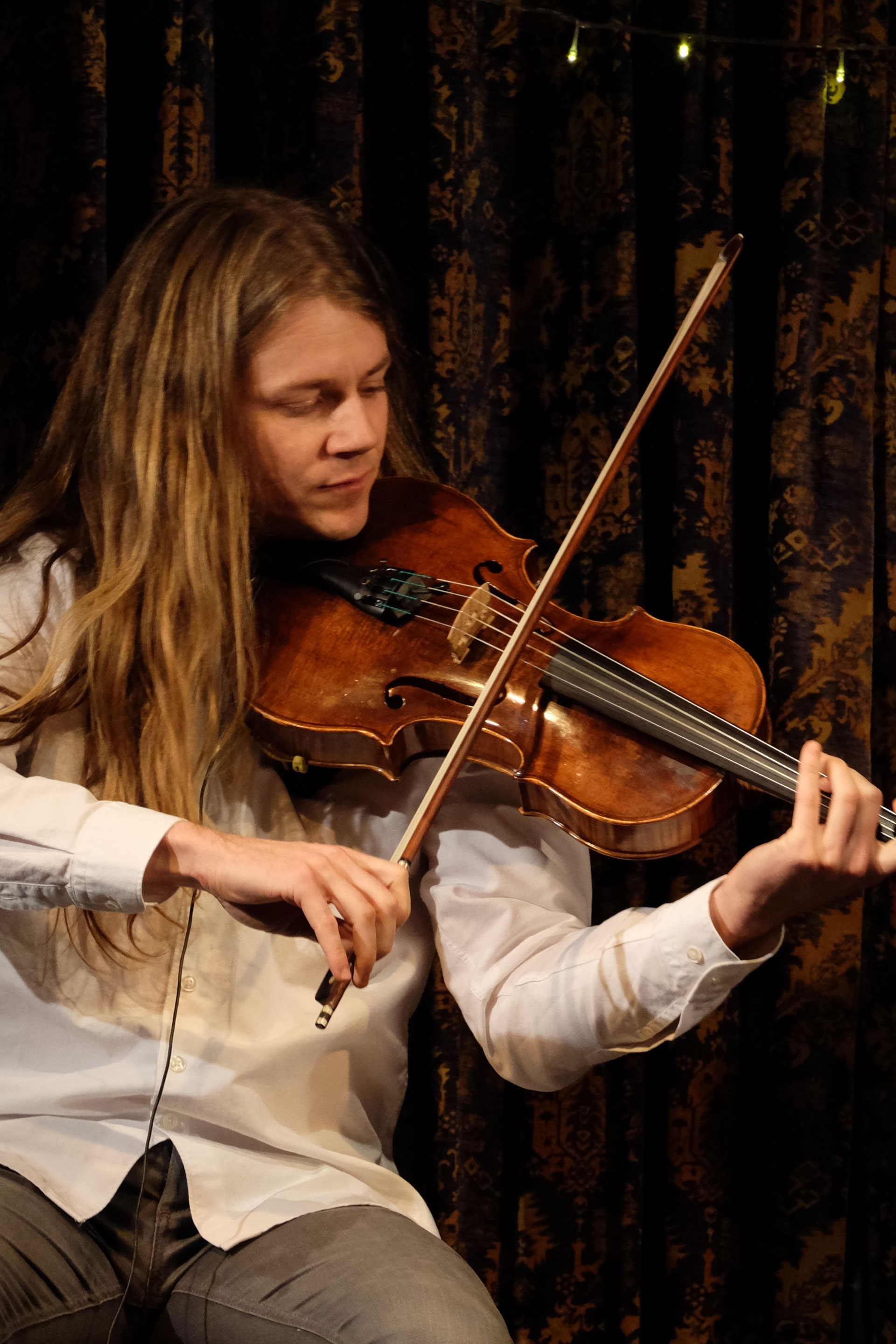 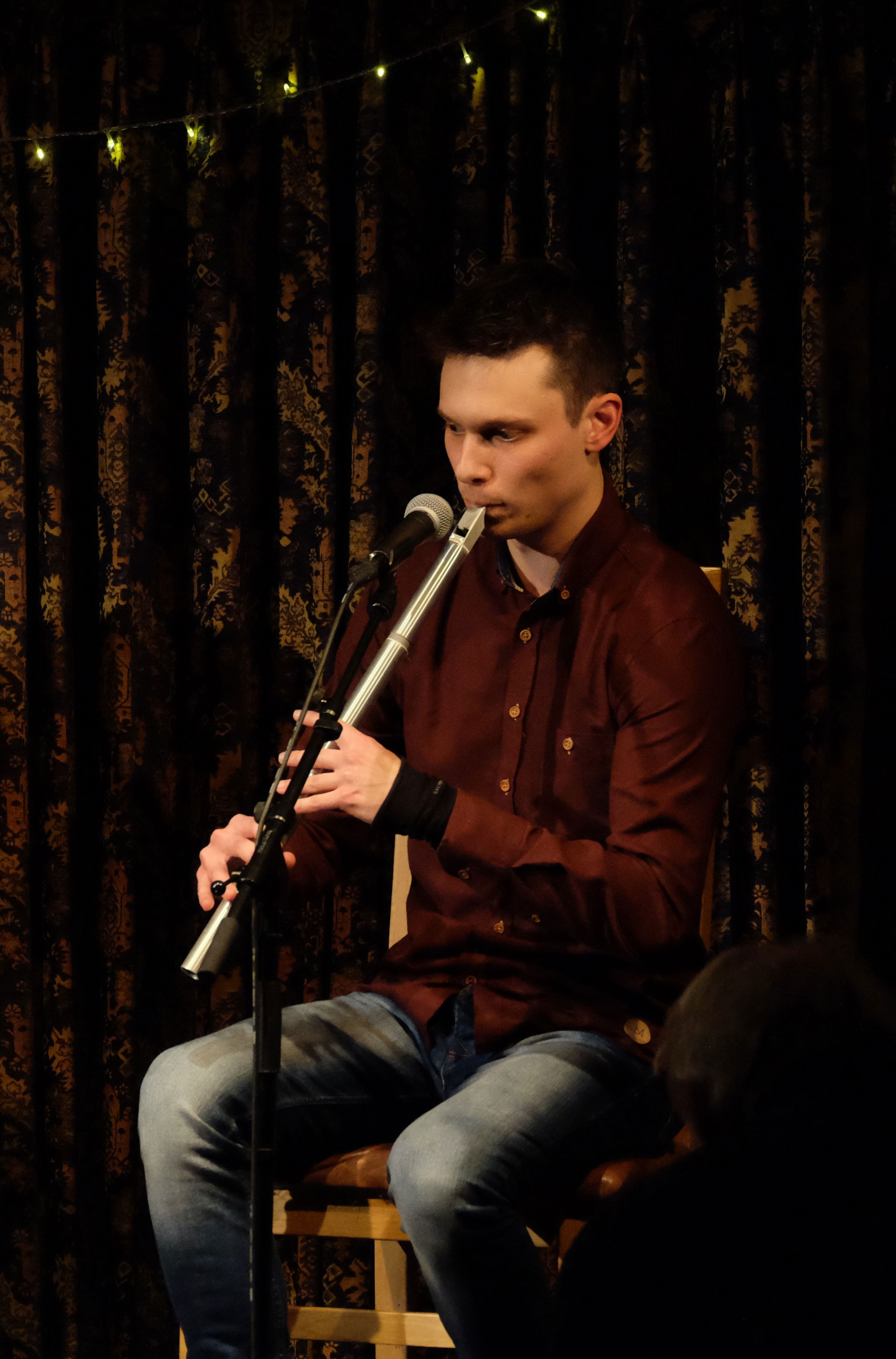 I think the perfect word to describe Andreas would be ‘cheeky’, and Rune’s quiet, calming persona was the perfect compliment. They seemed to bounce off each other, with each one giving the other the space to tell stories (which I told Andreas the audience would enjoy … and see … I wasn’t lying … they did). Armed with Violin, Viola, Piano accordion and whistle, the music was carefully crafted and professionally delivered with the ease of a duo who have been working together for years and years. A few favourites which spring to mind are a waltz that Rune wrote for his parents Silver Anniversary (bless … got a lovely ‘ahhhhh’ from the audience) and a traditional Danish song that Andreas sang (didn’t understand a word of course … but it sounded awesome). He also sang an appellation tune in a highly convincing American accent (if I hadn’t have heard him speak, he’d have fooled me). Ooo … and I dooo love the Danish Immigrant. There’s a lovely version on their album/EP. I highly recommend buying yourself a copy if you haven’t already. They kept joking about the fact that they needed to sell their CD’s to pay for Runes new car and Andreas’s haircut (i was tempted to say we had some scissors to save him some cash)… so you’d be helping them out.

Oliver George, with his equally luscious long locks, was a young man from Hertfordshire that Jon and I saw perform in Cambridge a month or so prior to this night. As soon as he opened his mouth, I knew he’d be a good fit for the Froize. Such a gorgeous voice, such wonderfully delicate guitar playing with an americana edge which is something we haven’t heard at the Froize for a while … and Navid (who apparently has only performed three gigs with him) is simply the coolest, dude-iest bass player on earth 🙂 We’ve all agreed! (maybe we should start some official Froize awards … hmmmm … they could get as big as the radio 2 folk awards I reckon … one to think on David). Sadly Navid had a sore throat that night, so you didn’t get to hear his lovely harmonies he sang in Cambridge, but it didn’t harm the performance at all. As everyone was queuing for the gorgeous Froize munchies (made by the lovely Louise), they were commenting on how much they enjoyed Olivers set. I did too.

Thank you to Oliver and Navid and to Andreas and Rune for coming all that way to play for us. We hope you enjoyed yourselves as much as we did. 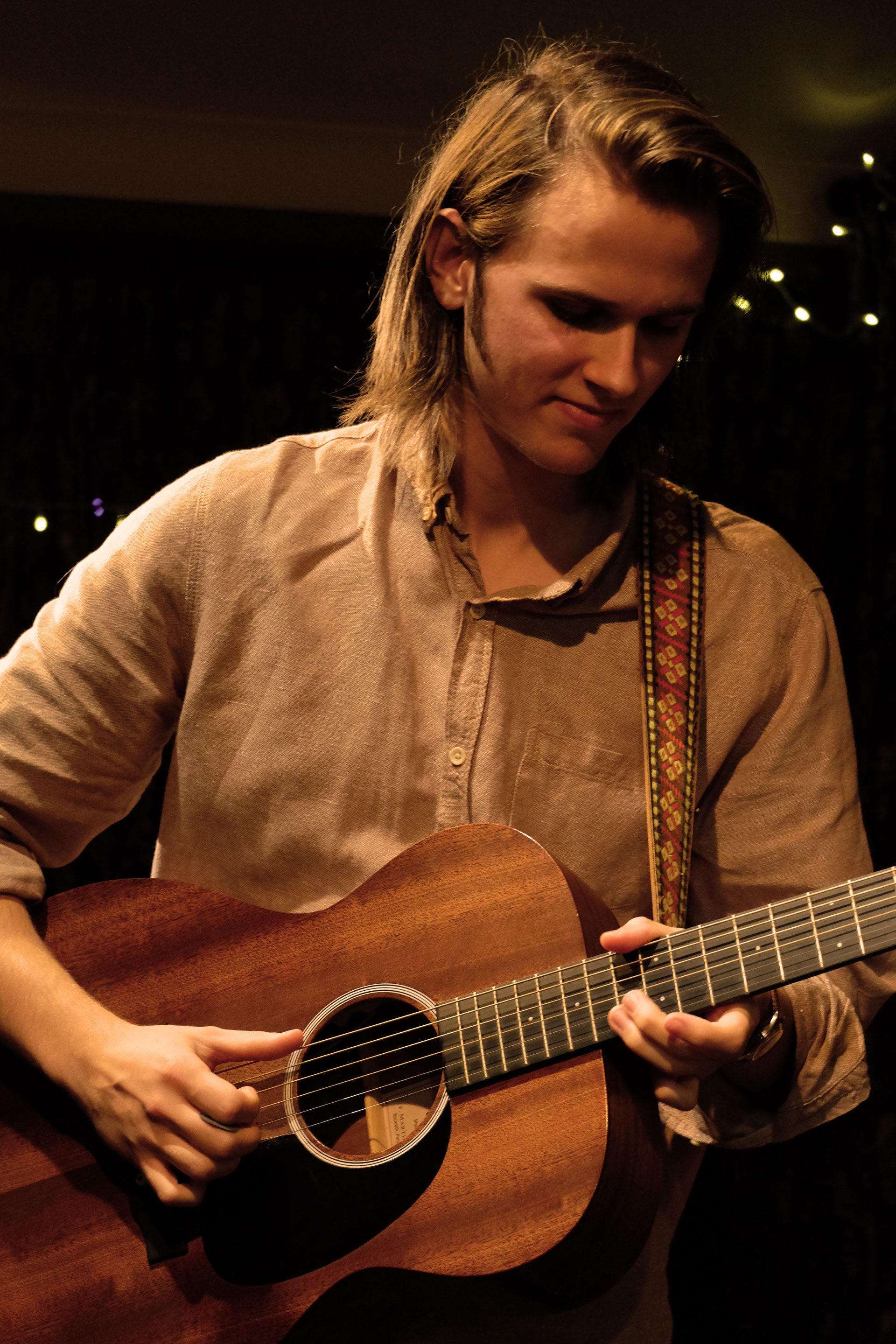 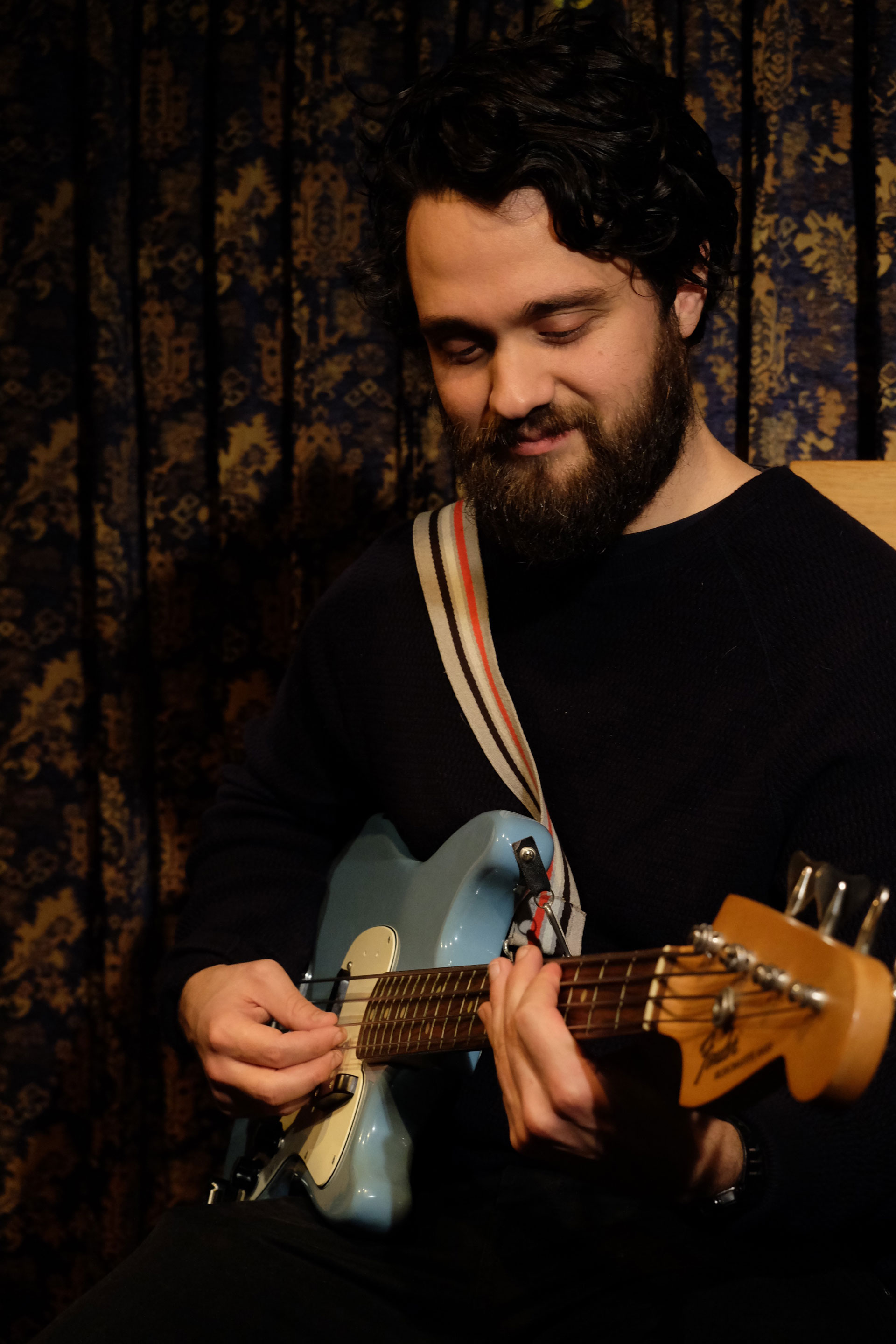 Next up we have merry mayhem planned with the one and only, Merry Hell on the 4th December which is now a sell out!!

If you managed to catch them at Leiston Film theatre back in October, then you’ll be getting something a little different this time as they play ‘acoustic’. I think we’re all wondering how we are going to fit them all on our lil’ teeny stage … I’ll leave that challenge to our lovely sound technician 🙂 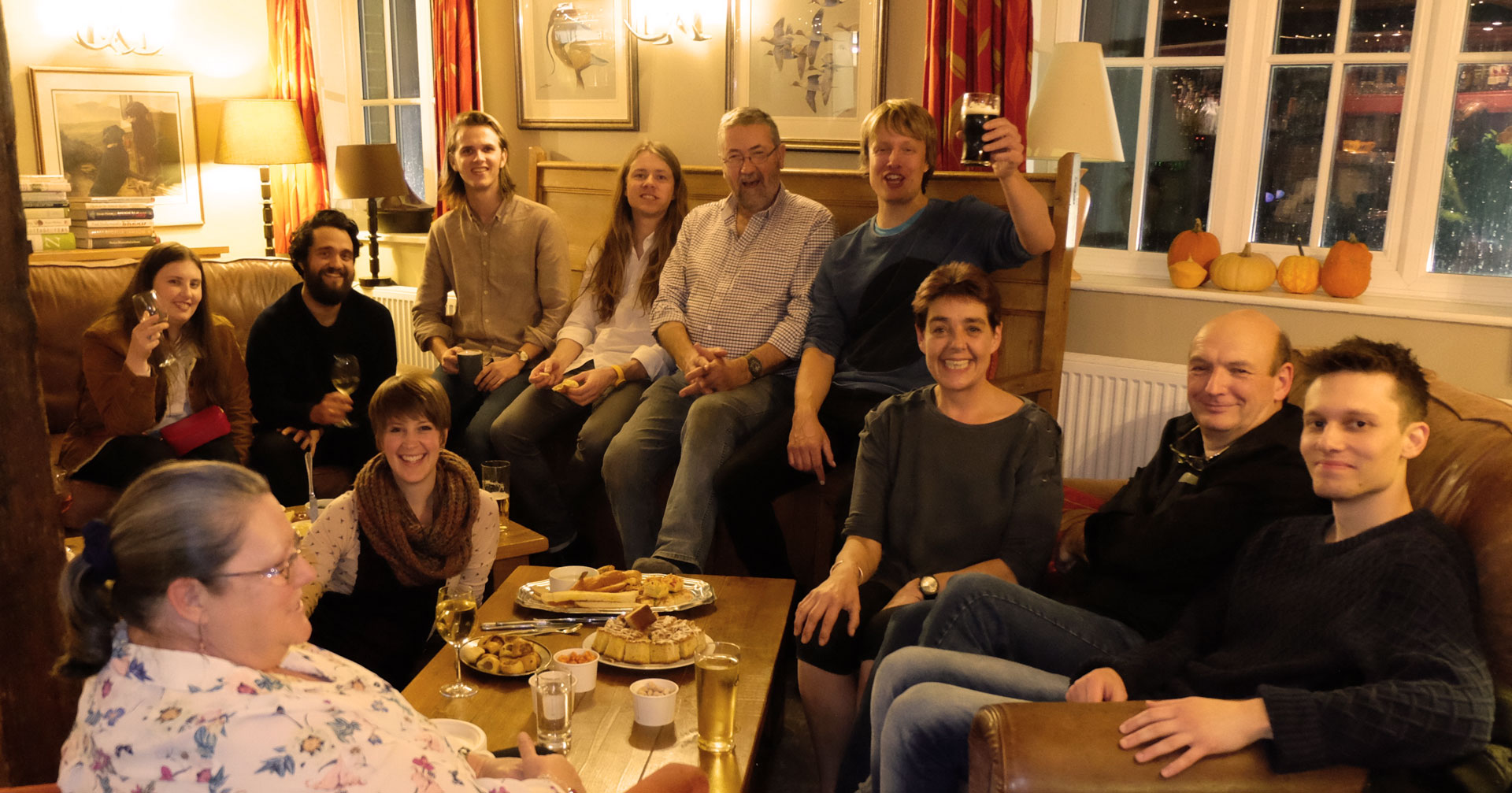