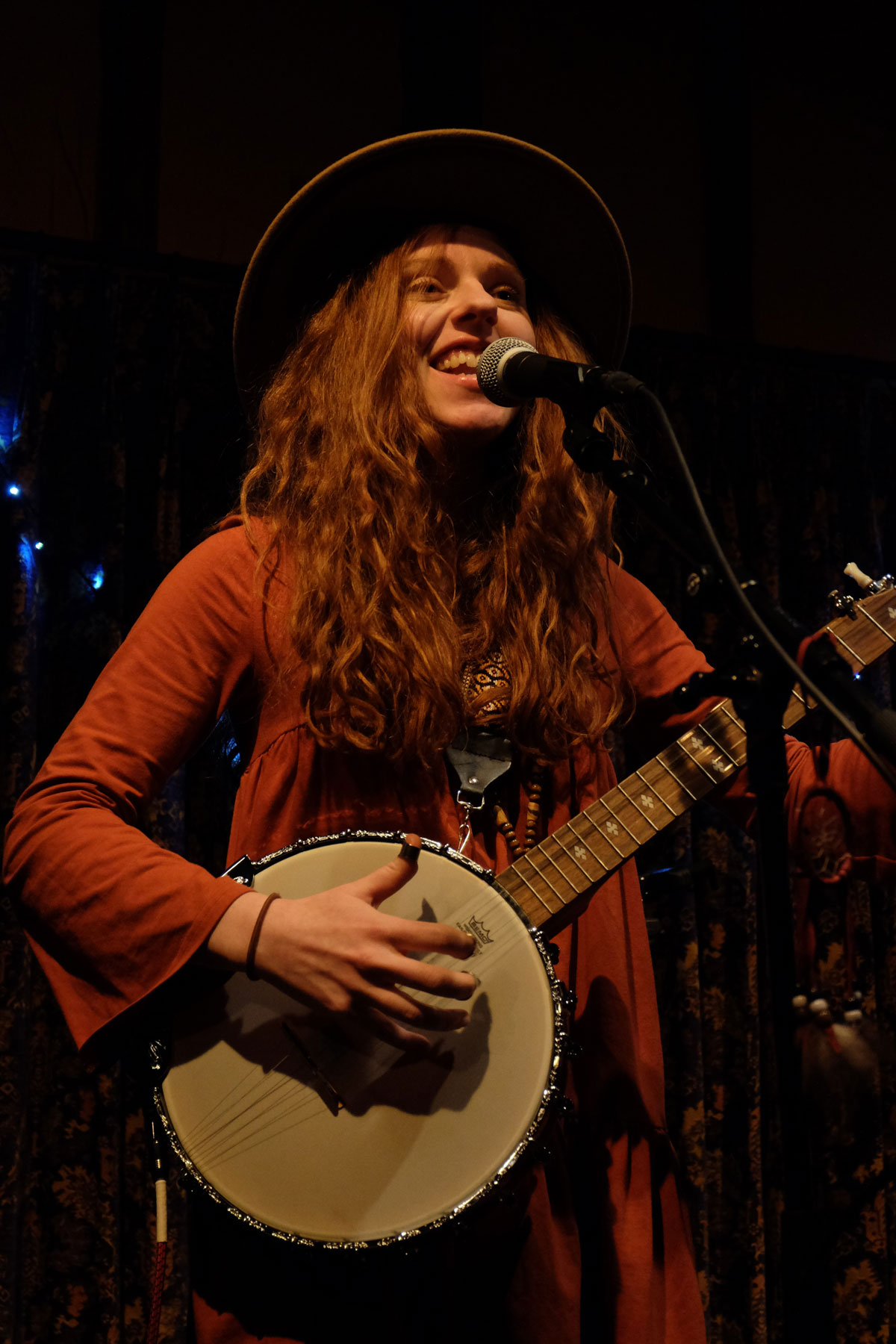 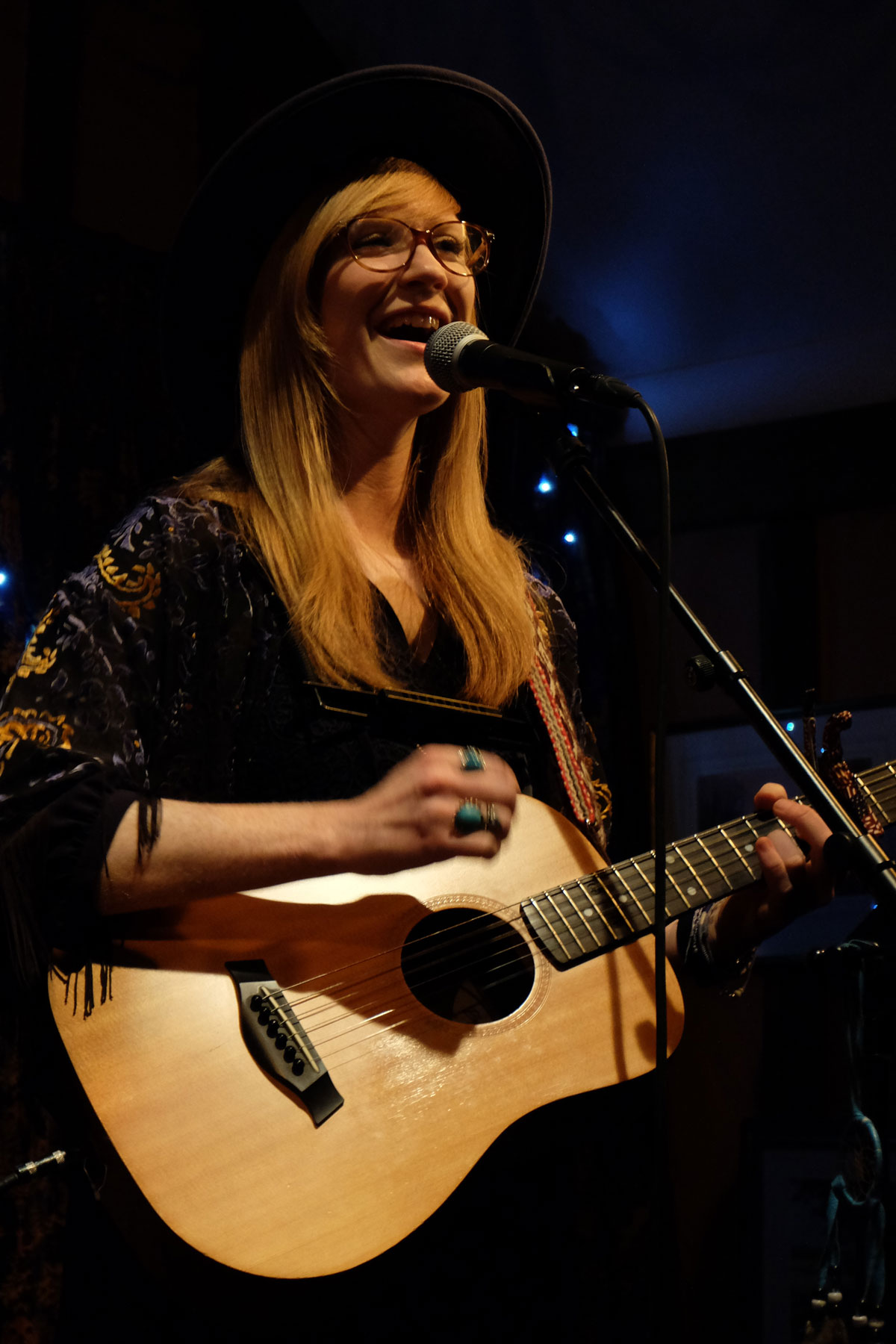 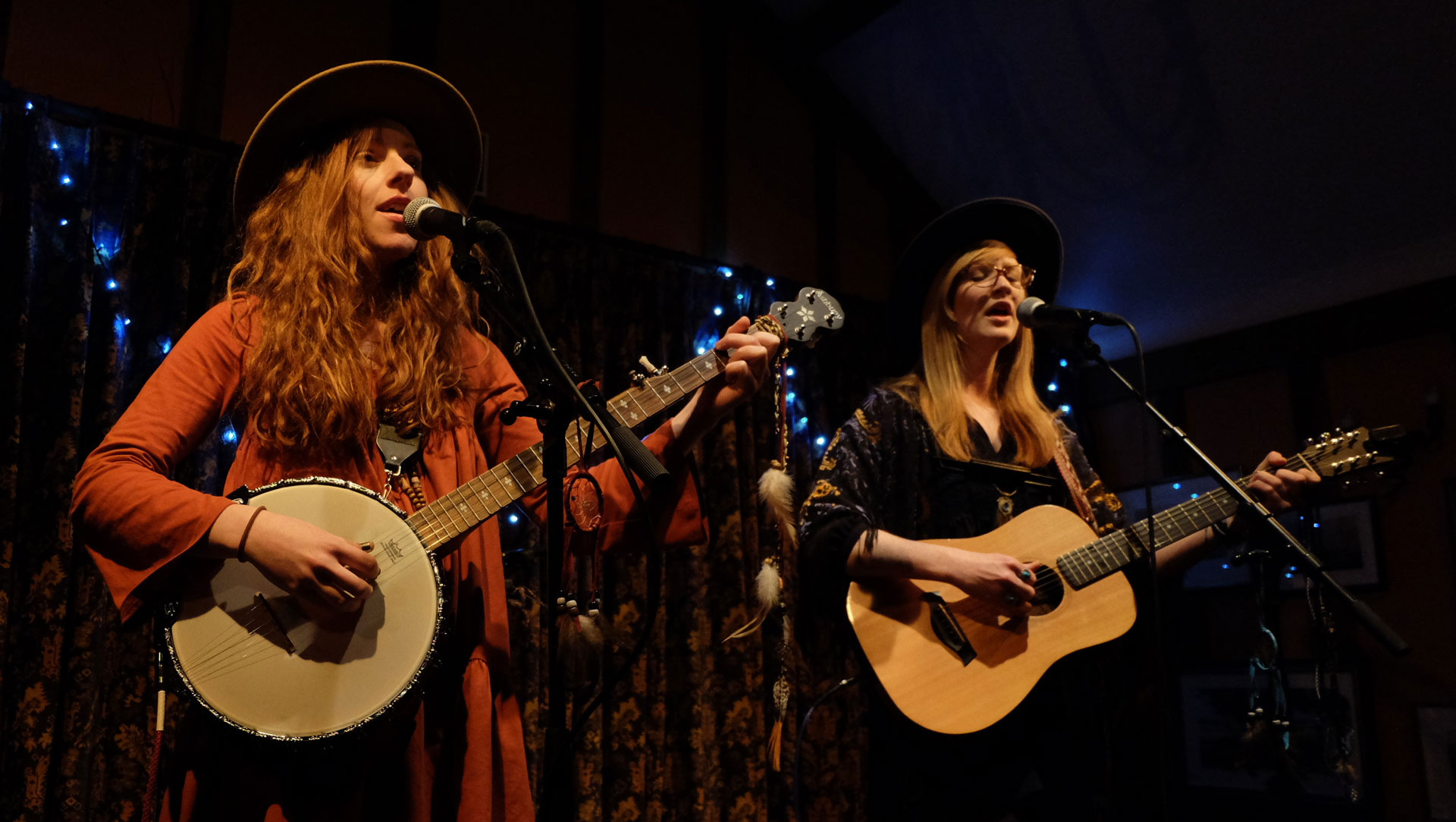 It’s all about the hats!

Our 21st Folk at the Froize event has been and gone! Can you believe it?! I still remember our very first event with ‘The Fev’s’ (as Hazel Pettifor affectionately calls them – ‘Black Feathers’ for the rest of us). Featuring two class acts with strong musicianship and excellent song writing abilities, I feel like our 21st Folk at the Froize just shows what a wealth of talent we have in the UK. I’m just so happy to be able to play a small part in bringing some of those talents to our sleepy Suffolk doorstep.

Worry Dolls had driven down from London that day with their mate Nat, who you may have said hello to in the ‘gift shop’ on the way out. They were very excited to have gone to Tunstall forest earlier that day to get a selfie with the ‘Tunstall’ sign, which they then tweeted to the one and only KT Tunstall herself as Rosie (a BIG fan) was off to see Ms Tunstall in concert the following day (there were a lot of Tunstalls in that sentence). Zoe and Rosie have a love of everything Americana, having spent time in the USA recording and writing in Nashville and the Smokey Mountains (where Zoe, thankfully, didn’t get eaten by a bear … phew!). You can really hear how much that experience has rubbed off on them. Their music takes on a strong country edge, with beautiful harmonies in total sync with each other. It’s the kind of noise that I adore, to the point where I wish I had a little sister of my own to sing with (no offence Jon). The two of them seem to have the unity of sisters (but they aren’t in fact … just besties). I might add, both of them have really great style! Wearing extremely awesome hats and boots, their instruments were adorned with feathers and dreamcatchers … even the mic stands didn’t miss out on the action with their own miniature dreamcatchers attached. I really like those extra touches … like they had carefully thought through every detail to make their identity unique and memorable. They sang alot of songs off their new album, of which I am now the proud owner. You can be too by going to the following link: https://www.worrydollsmusic.com/#music There are some cracking tracks on it so I highly recommend (I think I’m going to have the line ‘I Miss You Already’ playing on loop in my head for at least the next week). 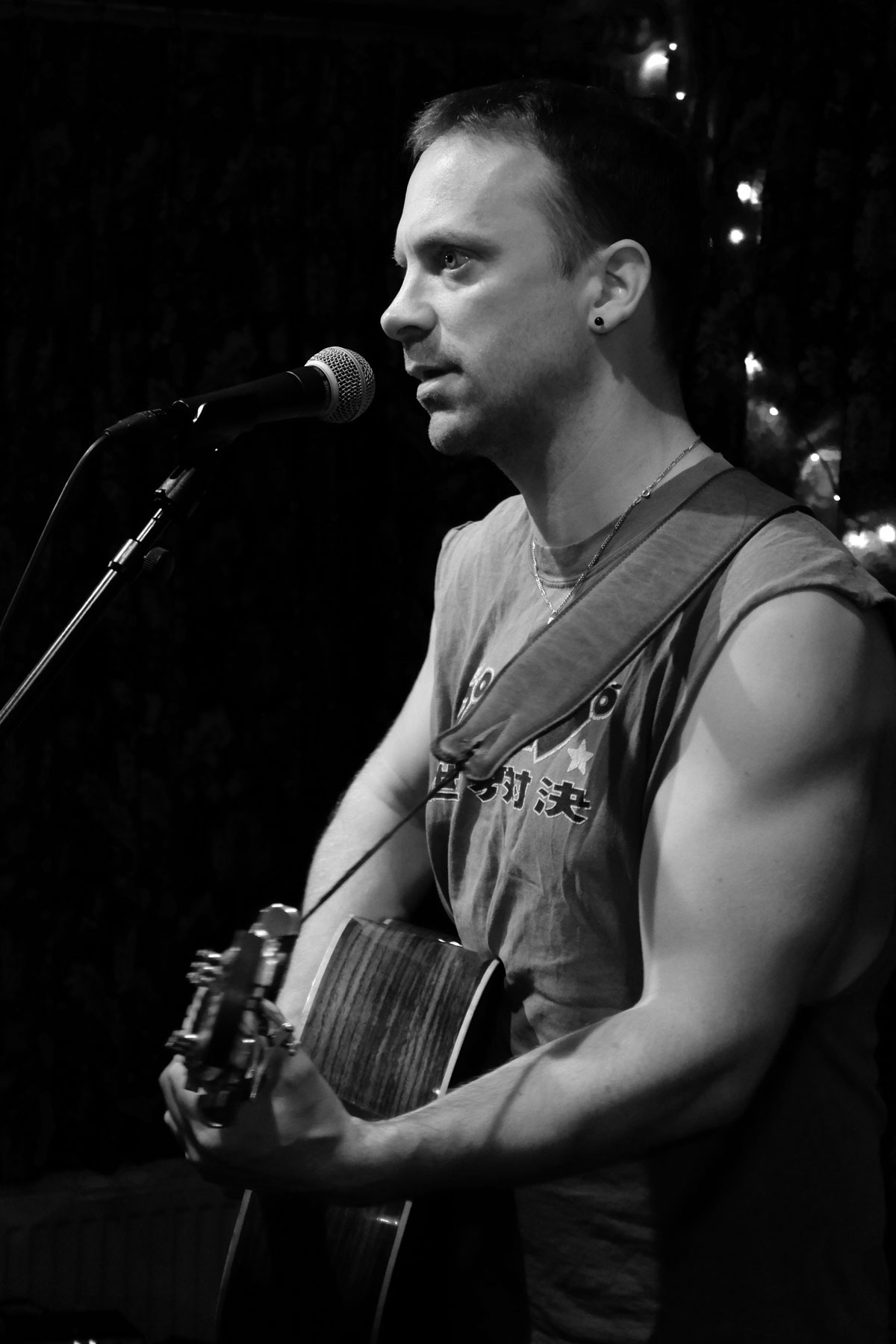 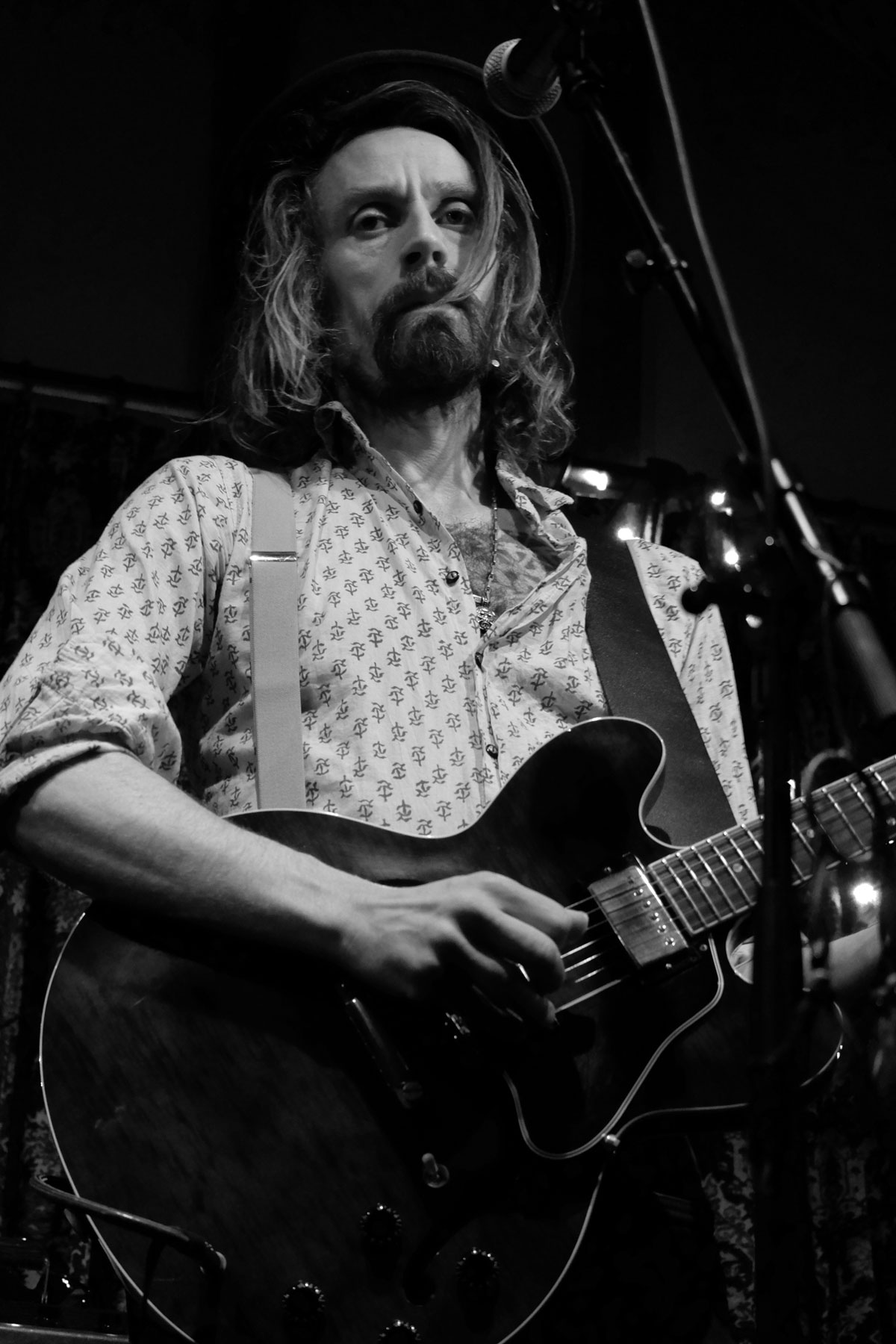 Our support act, the trilby adorned Ragged Rebel City were … how should I put this …. invigorating?! I felt the energy in the room lift into overdrive throughout their set. Rocking out on their guitars, Stephen (Irish origins but living in Hackney) and Oddur (Icelandic origins but living in Brighton) have been playing as a duo for the past 5 months. When you first see them, you think, ‘wow, that’s a lot of amps! … this is going to be loud and intense’, but in actual fact, they started with really mellow vibes, Stephens voice ringing out divinely with a delicious layer of harmony from Oddur. Stephen told us how he has retreated to a cottage down by the river Deben to write and record his album (which comes out in October this year … can’t wait). He puts a real emphasis on the importance of great lyrics and I think this really shines out in his songwriting. In my intro I said that they were the outright winners of the FATF award for ‘Most Musical Gadgetry on Stage’ … and I wasn’t kidding (I might even make them a certificate) 🙂 The loop station was just insane … soooo many buttons (my mind boggles). I was entranced by Stephens red socked feet as he delicately pressed all the buttons with his toes (not a task to attempt when slightly tipsy me thinks … careful control and balance required). The level rose to a crescendo at the end as they added layer upon musical layer through their third band member (an AER speaker sat at the back … which really does need to be wearing a trilby to complete the ensemble). Thank you guys for sharing your music with us. I do hope, and I know the audience hope too, that you can come back again in the future to play a full set for us.

As always, Louise and David excelled themselves with the spread! Veggie lasagne and chicken curry .. our tapas is getting bigger by the month! Not that I’m complaining … I love it all. Especially those honey bear sausages 🙂

And just before I forget … we’ve had our artists sign CDs, posters, t-shirts … but never before has a FATF artist been asked to sign a car! The Worry Dolls were invited to adorn (forevermore) a young enthusiasts car with their scribble. 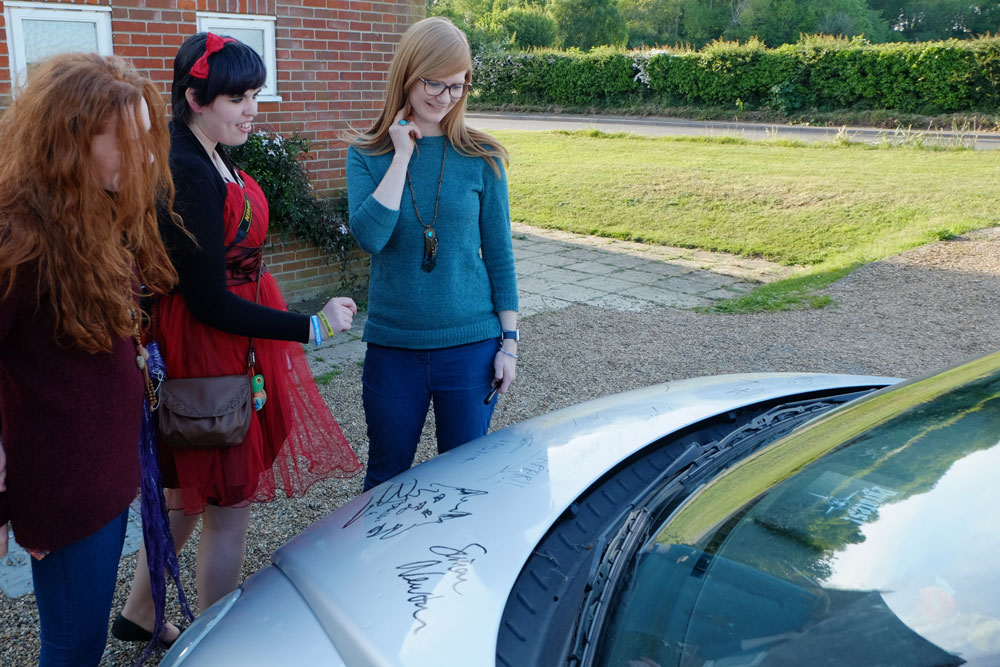 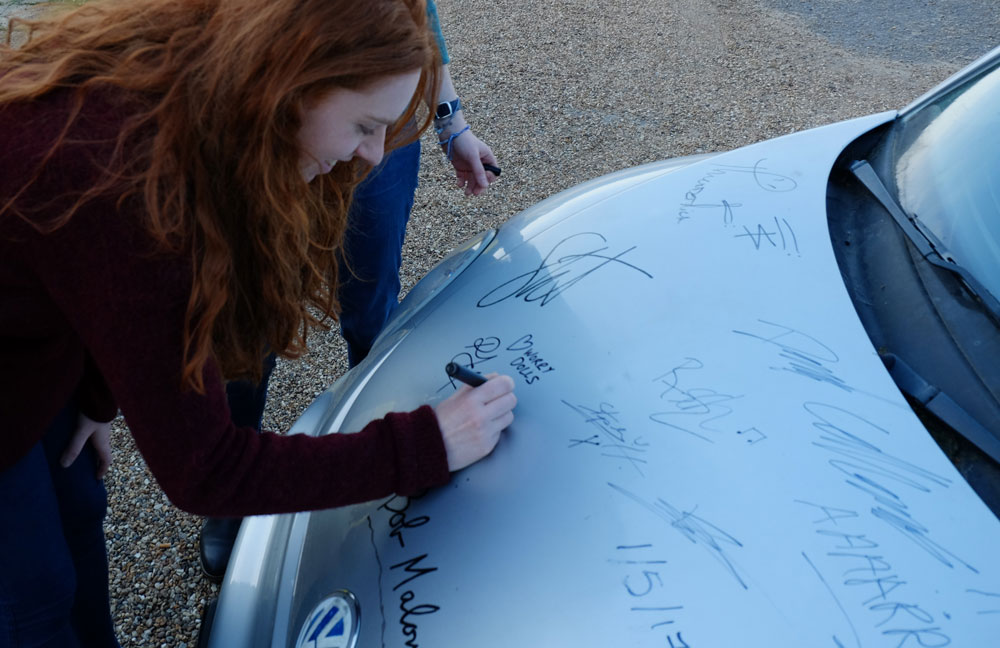 Next month we are going to be joined by Kitty MacFarlane, a singer songwriter from Somerset with a beautiful voice who is making waves on the folk circuit as I type. She has supported artists such as Seth Lakeman, Alasdair Roberts and Blair Dunlop, which just shows the calibre of this young lady. Very much looking forward to welcoming her to Chillesford. Support will be from Charlie Law, a Suffolk lad who has now moved to London to make waves of his own. Definitely two acts who are going places. Make sure you don’t miss out on the opportunity to hear them. Tickets available on the usual channel – call David on 01394 450282.